Hi everybody,
Today, I went to Meiji Park with some friends to see the protests against nuclear power plants. There were so many people marching in the streets today. There have been different estimates of the size of the protests, ranging from 20,000 to 60,000 people. I was very surprised, because it was the biggest demonstration that I have seen in the 10 years that I’ve lived in Tokyo. There were many busses from Fukushima Prefecture parked all around Yoyogi Park.

These are some photos that we took. Also you can learn more about the protests by watching the video or reading the article below.

Please feel free to share your thoughts about this topic (in English if possible :)) 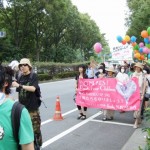 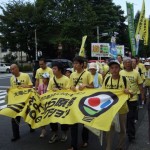 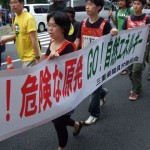 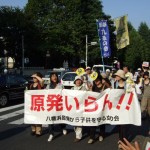 (Reuters) – Sixty thousand protesters gathered in central Tokyo Monday demanding an end to Japan’s reliance on nuclear power, six months after the world’s worst nuclear accident in 25 years.
Japan has banned people from within 20 km (12 miles) of the Fukushima Daiichi plant in northeast Japan, which had its reactor cooling systems knocked out by an earthquake and tsunami on March 11, triggering meltdowns.
Some 80,000 people have been evacuated from the area around the plant, which is still leaking radiation, in the world’s worst nuclear crisis since Chernobyl in 1986 which prompted the government to rethink its energy policy.
The protest leaders, including 1994 Nobel-prize winner Kenzaburo Oe and musician Ryuichi Sakamoto, called the rally “Goodbye to Nuclear Power Plants.”
“Now is the only moment to really change nuclear policy and this is the best time to act,” said Satoe Sakai, 39, who travelled from the central city of Osaka to join the rally.
“If we don’t stop it now, we probably never will.”
Former Prime Minister Naoto Kan told Japan’s Kyodo News that
he had learned that around 30 million people in Tokyo and surrounding prefectures might have had to have been evacuated in a worst-case scenario.
“It was a crucial moment when I wasn’t sure whether Japan could continue to function as a state,” Kyodo quoted him as saying at the weekend.
Kan had said earlier that Japan had no choice but to reduce its reliance on nuclear power over time. But he stopped short of calling for a complete phasing out of nuclear power, which before the crisis accounted for about 30 percent of Japan’s electricity supply.
Many of the protesters in Tokyo Monday were from Fukushima.
“We, the people of Fukushima, do not see nuclear radiation of course and we can’t smell it,” said resident Yoshiharu Saito. “But we have no doubt it is spreading.”
(http://www.reuters.com/article/2011/09/19/us-japan-nuclear-idUSTRE78I1HQ20110919)